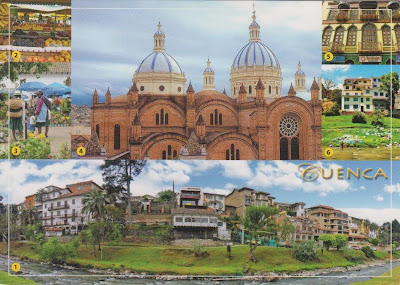 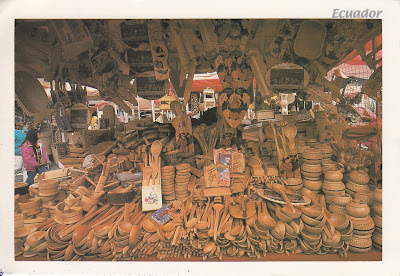 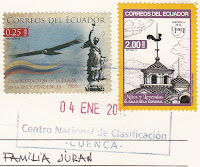 Santa Ana de los Ríos de Cuenca is set in a valley surrounded by the Andean mountains in the south of Ecuador. This inland colonial town (entroterra ), now the country's third city, was founded in 1557 on the rigorous planning guidelines issued 30 years earlier by the Spanish king Charles V. Cuenca's architecture, much of which dates from the 18th century, was 'modernized' in the economic prosperity of the 19th century as the city became a major exporter of quinine, straw hats and other products.


The 1st postcard was sent two and a half years ago, the 2nd just a few months ago - I have both times enjoyed my visit to this quaint and beautiful town. The unique blue domes are of the New Cathedral (Catedral Metropolitana de la Inmaculada Concepción) built in the 19th century in Neo-Gothic style. Then you have one of the stands at the crafts' market, selling wooden utensils. The best thing to buy in Cuenca though would be one of the famous Panama/Montecristi hats :)