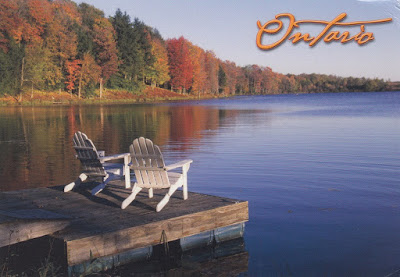 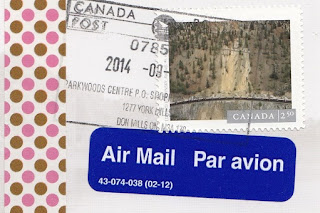 The autumn is in full swing by now but here where I live and work we are surrounded with coniferous trees, so we don't get to see the greatest autumn feature of all - the colour changes. Instead, we are 'trapped' on the island because of the extreme SE winds, with 65-knot gusts as we speak. Its a gamble to walk outside, with all the objects flying around! So instead let's enjoy this peaceful autumn view from Canada :) Thank you Katie :) 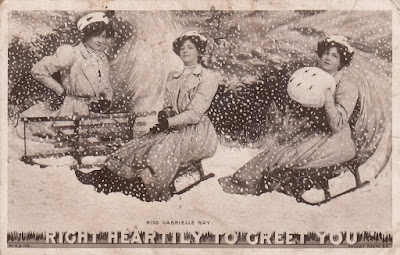 I caught myself daydreaming of Christmas Markets (not that far to go, only a month!) and snow and coats and boots...and how I wish to go somewhere, just go...At least Zagreb is near and has a splendid Xmas Market..! In the meantime, here is a snowy vintage postcard with a new name to me, though she seems to have been extremely popular during the 1st decade of the 20th century - Gabrielle Ray, an English stage actress, dancer and singer, best known for her roles in Edwardian musical comedies. It makes me hum to myself 'jin-gle-bells jin-gle-bells'.... 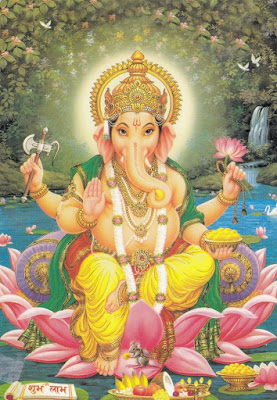 Of all the Hindu deities Ganesha must be one of the most recognisable ones. He is widely revered as the remover of obstacles, the patron of arts and sciences, and the deva of intellect and wisdom. Newly he is typically shown with his forward right hand towards the viewer in a gesture of protection or fearlessness; the forward left hand holding a delicacy, while the back hands hold an axe (or sometimes a goad) and a pasha (noose). Thank you Abhay for this colourful card :)

This is a post for Sunday Stamps - letter J. I was browsing trough my scans for joint issues, and came across this stamp on the right presenting Jarabe Tapatio. In joint issues there are representations of one topic by two different countries, and this way you get to see some sombreros and china poblanas alongside some more typical Indian issues. Jarabe Tapatio is internationally known as the Mexican Hat Dance; it represents the courtship between a man and a woman, with the woman first rejecting the advances, then eventually accepting them. A video of the dance would be nice to see wouldn't it...I'll have a search. And you can see more J-entries on Sunday Stamps here.

UNESCO - Churches of Peace in Jawor and Świdnica, Poland 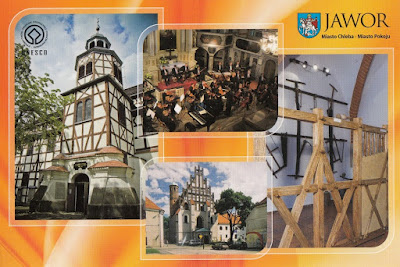 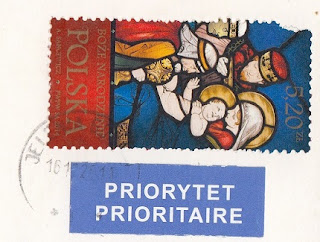 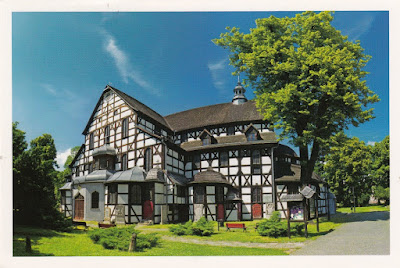 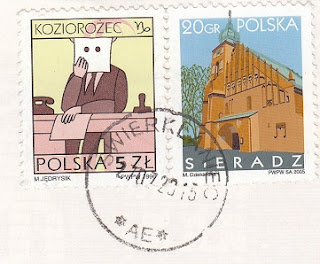 These are the largest timber-framed churches in Europe, built in the mid 17th century following the Peace of Westfalia treaties. They bear testimony to the quest for religious freedom and are a rare expression of Lutheran ideology in an idiom generally associated with the Catholic Church.
The imperial consent to build the churches was hard to come by, and eventually imposed strict conditions: they were to be built outside any town boundaries in strictly defined areas, only with wood and clay, could not feature a tower, and should be finished within a year. Still, they endured the test of time to this day - considered the masterpieces of skilled handicraft, they remain without peer in their technological complexity and size.
No wonder these churches are a WHS! Thank you Sebastian and Sabina for your additions to my UNESCO collection :) 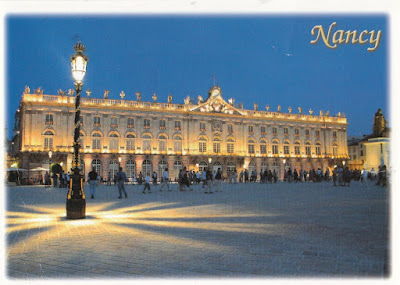 This UNESCO site actually comprises three different squares, but I'll have to get there myself it seems, to be able to get all the postcards :D Here is the Hotel de Ville or the City Hall on Place Stanislas, a part of a carefully conceived project in the 18th century that succeeded in creating a capital that was both prestigious and functional. Thank you dear Sylvia for sending this card, but also for attaching these great stamps - which now I can present on Sunday Stamps :)

Today, for letter H - a Heart-shaped stamp, issued in 2000 for Valentine's Day. The French Post is not a stranger to issuing heart-shaped stamps, as are not many other national Posts (including Croatian), but this is one of the few ones I have received on a piece of mail. It is from a set of two dedicated to the great fashion designer Yves Saint Laurent. I was wondering if he popularised the red lipstick? In my attempt to find out, I've learnt that it were possibly ancient Sumerian men and women who invented and wore lipstick first. Now that was about 5000 years ago!
I have actually struggled to find a stamp to present G last sunday, so I've skipped it. It seems I could have shown this cute stamp on the right as it is an image taken by the famous (baby) photographer Anne Geddes. It is from a set of two issued in 2004, this one is celebrating a birth of a baby girl, and there is one for a baby boy too. The same theme was issued in 2005 also. I have to say, exploring stamps for this blog has opened my eyes, the French Post prints some amazing issues, and they are plentiful! Its just that you never imagine it, mostly receiving the definitives on postcards.
Find more interesting H-stamps following this link.