A very, very good example of a great movie card! I was lucky to find this in one of the offer tags - thank you marnie! Marlon Brando has been one of my favourites ever since i've seen him in 'A streetcar named Desire' - and this is him in that movie exactly, in his famously tight t-shirt :)


'A Streetcar Named Desire' is from 1951, and is an adaptation of a play by Tennessee Williams. Next to Marlon Brando it starred Vivien Leigh, Kim Hunter and Karl Malden - all three have won the Academy Award for their performances.

There are hardly any better ways of spending time on a cloudy, windy day than watching a good movie or two...as september approached such days became more frequent (today a jugo of almost orcanic proportions).
On the island we have one TV in the commune kitchen - sometimes the signal is bad, sometimes the kitchen is full of over-excited card-players which makes it hard to concentrate, sometimes the movies are late and we only have power till midnight (sometimes longer, depending on activities of those in charge, but that is unpredictable). Not that there are many great movies on telly anyway! But every now and then i am sorry to miss something. Like Erin Brokovich the other day - that was during daytime, but we don't have power in the afternoon hours either..!


So. Would be worth investing in a decent laptop. I have an external HD full of movies back home, and a tiny dvd player with no USB port here. When I go home i burn films onto dvds and watch them here. But that is also feasible only when there's power, as the battery doesn't last the length of an average movie. There is also a 'decent' laptop at everyone's disposal but its battery lasts even less! Some strange magnetic field messing everything up eh...maybe an UFO burried deep within.


I love all kinds of movies, but my favourites are still: the coen brothers, ingmar bergman, british, eastern (asian) and french cinema, hollywood b&w classics, anything quirky and/or obscure...when it comes to modern blockbusters, i'll always choose a mindless rom-com over mindless teenage comedy, and that over mindless action :)
I love getting any kind of postcard related to the movies and movie stars, esp. black&white, old movie posters...a small collection ensued :)

A young canadian pup playfully gnaws grass leaves while waiting for his mum to bring him caught prey. When the pup grows up, he hunts together with other wolves in a pack, which can fight down even the big animals such as moose or caribou.

PANDA (Photo: Keren Su/Getty Images/The Image Bank)
A young panda is resting on a branch - a rare kind of behaviour in free nature. These bears that solely feed on bamboo offshoots are strictly protected in their natural habitat, the chinese province of Sichuan.

Black goats don't shy away from climbing the very top of the endemic morroccan Argan tree in order to reach its nutritious fruits. From these fruits the local shepherds attain valuable oil, used in cooking and cosmetics.
Posted by agi at 16:06 Nema komentara:

The male giraffe releases a strong smell from his glands by lifting his hind leg: it is beguiling for the female, but unbearable for the fleas hidden in fur.

The dolphins like to wallow in the sand in shallow waters. Their skin is protected by a thin gelatinous layer against any cuts that mussels and rocks can cause in the process, or algae that would normally stick to skin.

These elephants are used as labour on the indian Andaman Islands for transporting timber. As there are around 500 islands they swim from one work station to the other. Elephants move underwater better than humans.
Posted by agi at 15:39 Nema komentara:

GEO - In The Realm Of Ice

For the younglings its the toughest job on earth to climb the snow mounds. All the important life lessons they need to learn from their mum.

With their white fur polar bears are perfectly adapted to their arctic surroundings. When they prey on their favourite food (seals) they also try to hide their conspicuous black nose.

Harp Seal -  pup in icy nursery (Photo: Bernd Nill)
Each year harp seal females give birth to their pups on the pack ice of the Magdalen Islands in Canada. The mothers nurse the pups for only about two weeks before leaving them stranded on their own. ( :( )

Western Rockhopper penguins (Photo: Solvin Zankl)
A group of penguins is bracing itself against storm in their windy homeland, the Falkland Islands. Only half a meter in height and weighing not more than 3 kilos, this species of penguins is among the smallest, but also incredibly resistant.
Anyone seen 'Happy Feet' or 'Surf's Up'? ;)
Posted by agi at 11:48 Nema komentara:

The Loneliness Of A Long-Distance Runner

The very second i laid my eyes on this striking photo i fell in love with it, and it gave me shivers at the same time. The beauty of the landscape in undeniable, and the grace of wolf's leap - but the isolation that the atmosphere suggests almost brings a tear to one's eye...The text is as follows:
Polar Wolf  (photo: Jim Brandenburg)

Icy loneliness and hunger: the arctic wolf, who also feeds on carcasses, jumps from iceberg to iceberg in search of dead sea animals.


GEO is an educational monthly magazine, 1st published in Germany in 1976. Since then its 'family' spread to 21 other countries, among them India, The United States, and not least importantly Croatia :) Whats more, the magazine has been publishing postcards showing the wonders of the world, images taken by some of the world's most notable photographers.


My sister Marija has been living in Germany for longer than two decades now. During that time she was/is a devotued postcards-sender, and has especially delighted me with animal postcards (as she knows just how much i love them :)) Recently she's discovered  GEO postcards, which are not only awesome photos but are educational, explaining what it is exactly what you're staring and/or grinning at. I have a lot to show, so here they come :D (with an utmost hope my translation from german is worthy..!)
tnx sis!!!


P.S. - the only slightly unfortunate thing is that, because these postcards are panoramic/long,their ends can get crushed and/or creased in transit :(
Posted by agi at 10:43 Nema komentara:

You Can Spot Us In North America 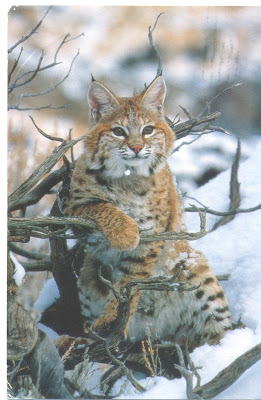 As it is written on the back: Bobcat (Felis (lynx) rufus)

'Sometimes called Wildcat, a bobcat will attack animals many times its size. It can climb trees but prefers hunting on the ground. It will make its den in hollow trees or other protected areas. It is a wary animal rarely seen. They are 3 ft. (92cm) in length and weight up to 25 lb. (12kg).'
I think the bit about his reclusiveness is what appeals to me, at least as much as his cuteness and beauty..! 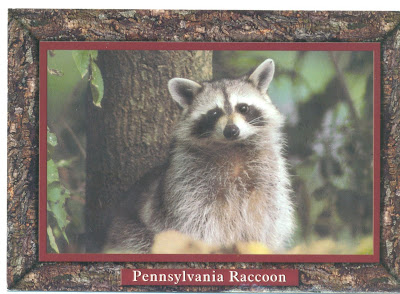 Raccoon (Procyon lotor)
'Eating almost anything from nuts to crayfish, this crafty animal is equally comfortable with suburban man or habitating near forested lakes or streams.'
I had a thing for raccoons ever since i was a small child :) i think its cos of the cool sunglasses... 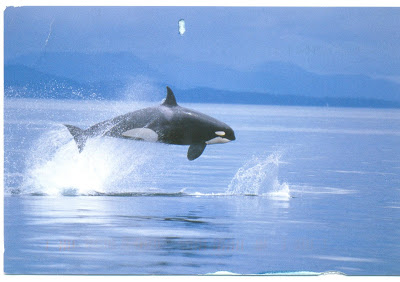 
These wonderful animal postcard i received from Cardiffgal and Canno1979 via an Europe Vs World RR :) Love these, as they are some of my fav animals ;)