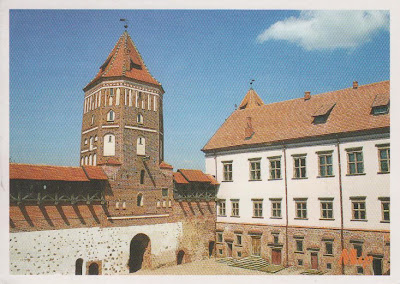 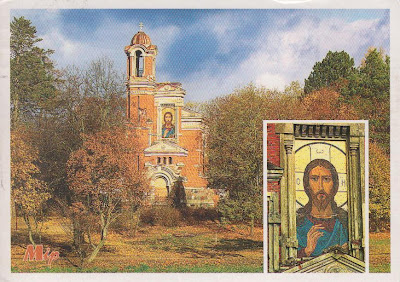 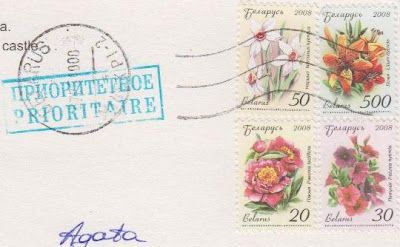 The construction of the Mirsky Castle began at the end of the 15th century, in the Gothic architecture style. Building of the castle was completed by Duke Ilinich in the early 16th century near village Mir, western Belarus. Around 1568 the Mir Castle passed into the hands of Mikołaj Krzysztof "the Orphan" Radziwiłł, who finished building the castle in the Renaissance style.
The second postcard shows the burial vault of the last owners of Mir – the princes Svyatopolk-Mirskys, situated in the nearby picturesque park.

I have received these cards last year, but its good that I have them for posting today for the 116th edition of Viridian's Sunday Stamps :) The themes for this week are  Christian symbols, Easter symbols, or flowers, esp. cherry blossoms. Unfortunatelly I can only participate with flower stamps...and I like this set from Belarus, especially as I rarely receive more than a few definitives on postcards from there...
The four stamps are from a set of eight showing garden flowers, issued in June 2008. They are Narcissus, Lily, Peony and Petunia. I don't know much about flowers but I am getting more and more curious about nature, agriculture, botany...and wine-making ;)
You can check other entries, some really cute ones! 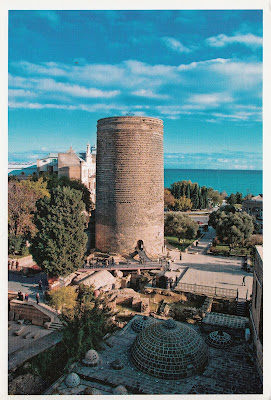 Some months ago I have received my 1st w&s postcard from Azerbaijan, and oh what a joy it is also an Unesco card! The full name of the site is Walled City of Baku with the Shirvanshah's Palace and Maiden Tower. The Maiden Tower is also known locally as Giz Galasi and is located in the Baku's Old City; it is an ancient tower built in the 12th century and the city's most distinguished landmark.
The legendary tale of the king willing to force his daughter to marry a man she doesn't love, which she escapes by asking her father to first build a tower for her, and when it is finished committing suicide by jumping from the top of it has been the subject of many Azerbaijani poems and plays.
Thank you very much Dilara :)

Map Of The Bahamas 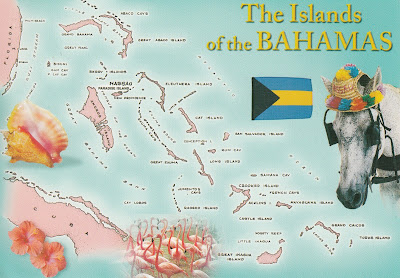 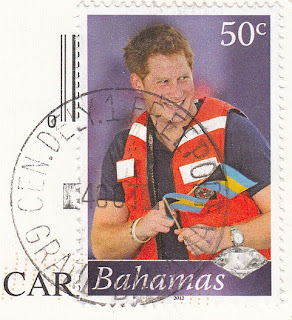 A new country for me, received last autumn - The Bahamas is an island country in the Atlantic Ocean north of Cuba, consisting of more than 3000 islands. The Bahamas were the site of Columbus' first landfall in the New World in 1492; they were orriginally inhabited by the Lucayans, but became a British Crown colony in 1718. The country became an independent Commonwealth realm in 1973, retaining Queen Elizabeth II as monarch.
Many thanks to dear Niki - and for the great stamp, loving it! ;) 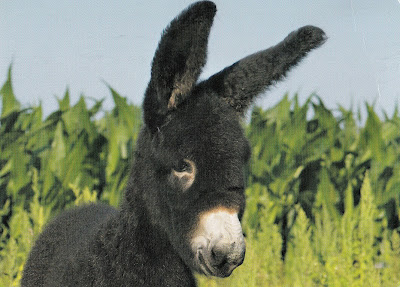 Aaawwww pure cuteness-overload! Plus it was a RAS, thanks so much Regina!! I have received it months ago but I am still melting :))) 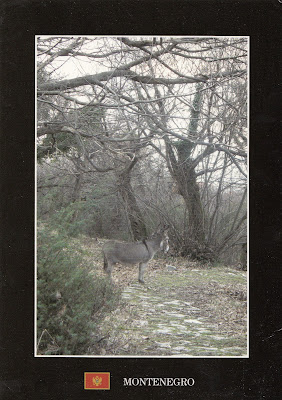 I was over the moon when I found this donkey postcard in Montenegro - I was doing a short overland trip from Istanbul to Croatia last autumn and I will post some other cards from that trip too :)

After a period of random and too-far-in-between posts, the spring has brough a fresh air of new scans, including new countries, unesco sites and other lovely surprises :) The opportunity for scanning has presented itself somewhat sooner than expected, so here are the novelties! To open this new era of blogging, here is a taste of warmer evenings to look forward to <3 p=""> 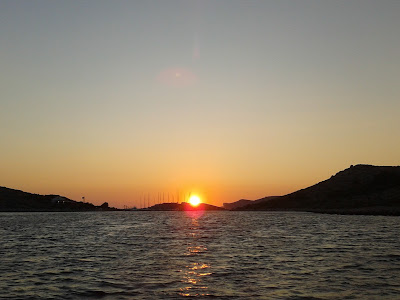