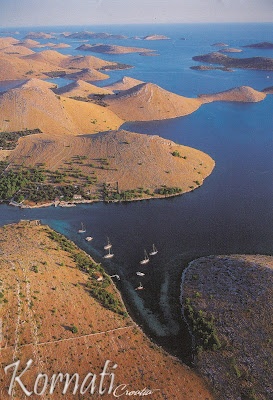 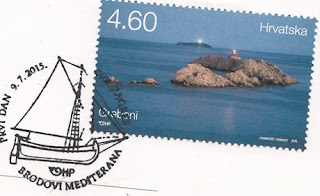 This is one of my favourite views of my 'workplace' which is further in the background but in the national park. I am spending my last days here for this year, and if I'm lucky then for good. I've sent this card for another special cancellation, trying to keep to maritime images :) 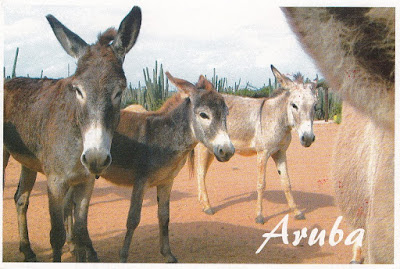 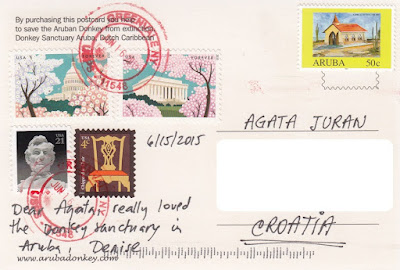 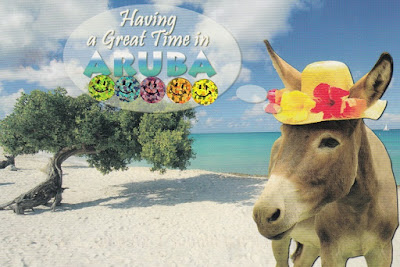 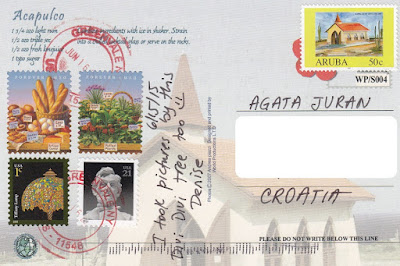 These donkeys are just too precious! Denise was on a holiday in Aruba and visited the donkey sanctuary, AND purchasing their postcards helps save them from extinction, so everyone is happy :D 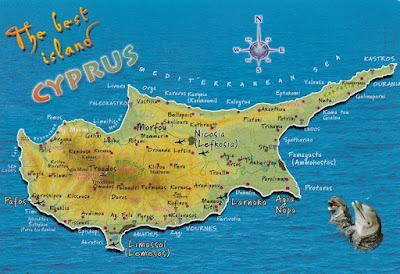 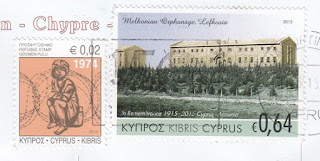 After some (unintentional) abstinence a new card from Cyprus, and a great map at that. Has a unique shape doesn't it, one of those countries you immediately recognise from the outlines. I've just checked the weather map and its still so warm and cosy there! Thank you Dorota :) 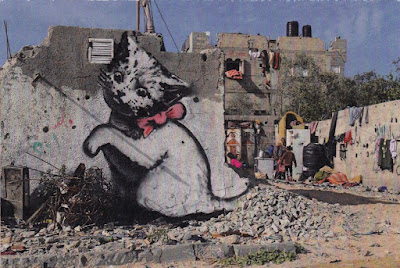 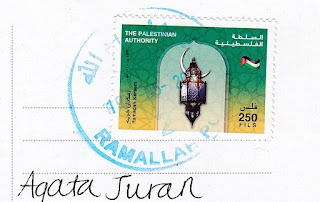 The anonymous street artist Banksy released a series of new works Wednesday in Gaza, all commenting on the dire situation of the 1.8 million Palestinian residents confined to the area. Along with a short documentary he scattered a variety of artworks around the region, one of which is this kitten. Banksy's explanation on his web-site: "A local man came up and said ‘Please -- what does this mean?' I explained I wanted to highlight the destruction in Gaza by posting photos on my website -- but on the internet people only look at pictures of kittens."
Thank you Justine, I am glad to be a part of your wall rainbow :) 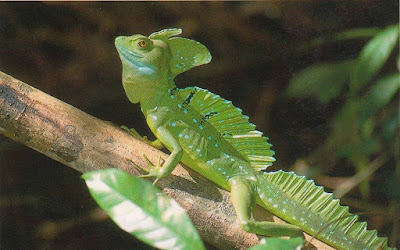 Also called lagarto de Jesus Cristo (Jesus Christ lizard) for its ability to run on the surface of water; this member of the corytophanid family is found in Central American rainforests near rivers and streams. It is also an excellent swimmer and can stay under water for up to 30 minutes.
My first basilisk in lizard collection, thanks to Bryony :))
Posted by agi at 08:48 Nema komentara: 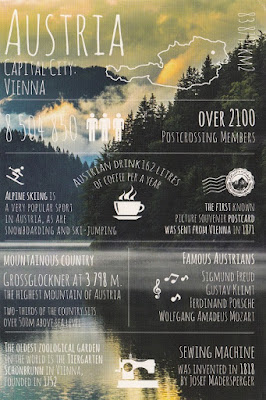 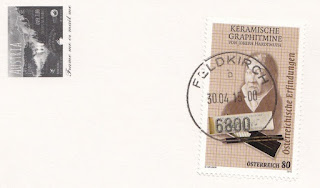 Thank you Rosmarie for sending two examples of Greetings From...series :) 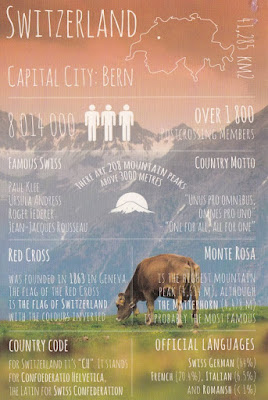 Greetings From...is the latest craze in the Postcrossing community. It is a series of postcards representing an image and data about the country in question. They are issued by one online shop, which I have contacted a while ago asking if Croatia is in the production line, but I guess so many people want an issue of their own country it may take a while to get a response.
I have no intention to make a GF collection, but I have swapped for a few to have examples. Two I have received, South Korea seems to be lost or perhaps never sent. 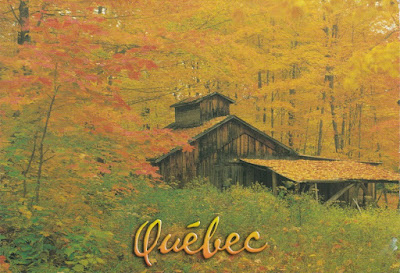 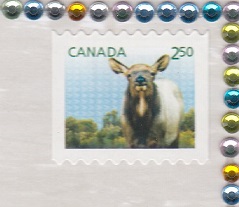 As the autumn approaches (33 hours to go..!) I am already excited about its awesome colours - sadly not around here, but will hopefully still have time to witness them once the job for the season is over and I can travel to continental parts.

As a preview - a shugar shack immersed in autumn splendour. The Sugar Shacks are where the sap of the maple tree is boiled and made into maple syrup.  Most Sugar Shacks in Quebec are only open during sugaring off season – which is normally the spring.  Many families traditionally spend their Easter dinner together at a Sugar Shack, eating traditional Quebec food and lots of maple sugar. Yum! Thanks Isabelle :) 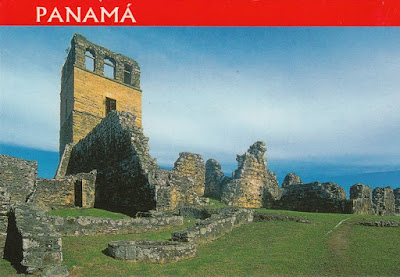 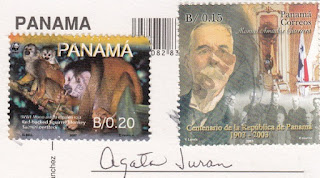 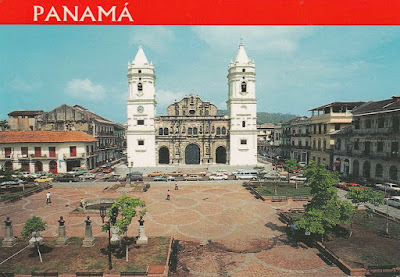 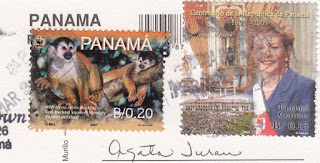 The whs site comprises two parts of Panama City, the old ruins and the historical district. Here we have cathedrals from both parts.

Founded in 1519 by the conquistador Pedrarías Dávila, Panamá Viejo is the oldest European settlement on the Pacific coast of the Americas. It was laid out on a rectilinear grid and marks the transference from Europe of the idea of a planned town. Abandoned in the mid-17th century, it was replaced by a ‘new town’ (the ‘Historic District’), which has also preserved its original street plan, its architecture and an unusual mixture of Spanish, French and early American styles.

17th century was devastating for the original Panama City - it was attacked several times by pirates and indigenous people from Darién; in 1620 an earthquake damaged many buildings in the city; in 1644 the Great Fire destroyed 83 religious buildings, including the cathedral. 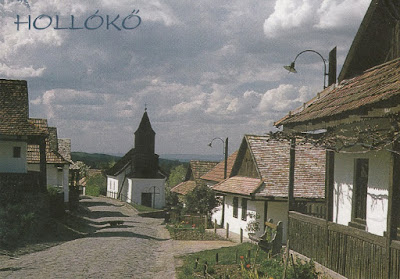 Hollokö is an outstanding example of a deliberately preserved traditional settlement. This village, which developed mainly during the 17th and 18th centuries, is a living example of rural life before the agricultural revolution of the 20th century.
It sounds like the whole place is like one open-air museum, awesome. Quite hard to get any other cards from Hungary but Budapest, I was so happy to swap with Ania who visited there in spring, and used such great stamps too.
Posted by agi at 16:25 Nema komentara: 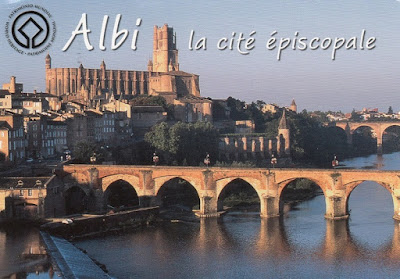 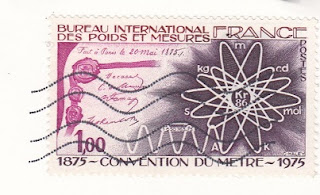 On the banks of the Tarn river in south-west France, the old city of Albi reflects the culmination of a medieval architectural and urban ensemble. Today the Old Bridge (Pont-Vieux), the Saint-Salvi quarter and its church are testimony to its initial development (10th -11th centuries). Following the Albigensian Crusade against the Cathar heretics (13th century) it became a powerful episcopal city. Built in a unique southern French Gothic style from local brick in characteristic red and orange colours, the lofty fortified Cathedral (late 13th century) dominates the city, demonstrating the power regained by the Roman Catholic clergy.
So much history here...thank you Sebastien for another card for my collection :) 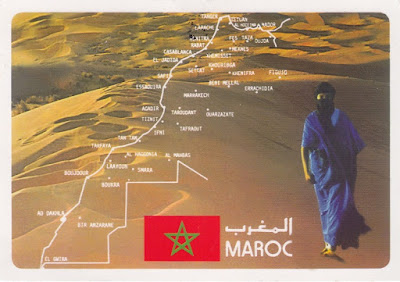 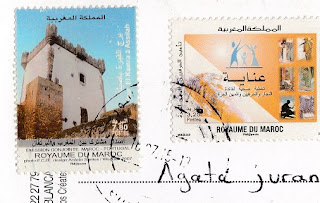 After a long while a swap from Morocco - this inviting map, reminding me of good days. Great stamps too! Thank you Ouissal :) 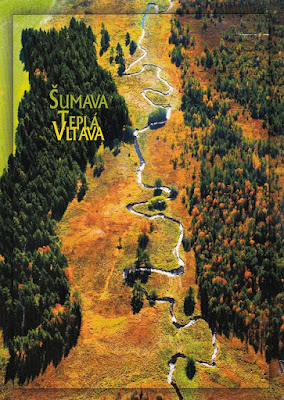 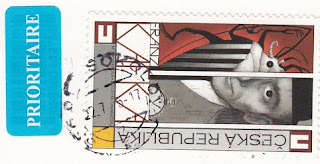 Šumava National Park is situated in the South Bohemian Regions of the Czech Republic along the border with Germany and Austria. Since 1990 it has been the protected Biospherical Reserve of UNESCO. Vltava, the longest river within the Czech Republic, runs from and through it.

Yesterday I watched the movie 'Wild' which set me in the mood for hiking. This looks like an incredible place for doing just that. Many thanks to Vlastička for this view of the Czech countryside..! 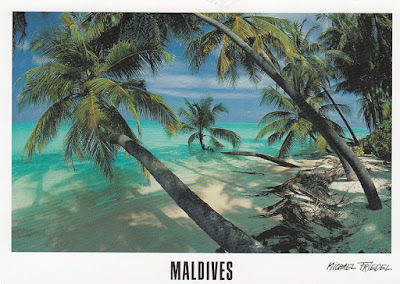 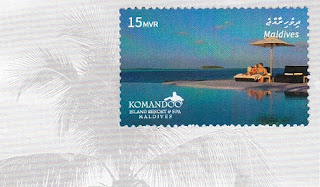 The awesome 'lying' palm trees on one of the paradise Maldives beaches...need I say this gets in the 'getaway' section? Even though the summer is almost over here, and I was kind of looking forward to it, I'd still love a few days on a white sandy beach with crystal waters in front of me...hmm who wouldn't. Diana was lucky to go there, and kind to send me this postcard!