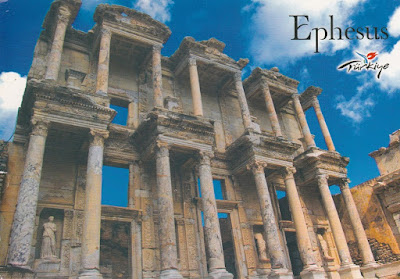 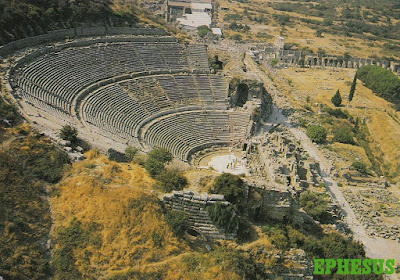 One of the newly inscribed whs sites is Ephesus, remnants of the ancient Greek city on the coast of Ionia, three kilometres southwest of present-day Selçuk in İzmir Province, Turkey. It was built in the 10th century BC by Attic and Ionian Greek colonists. During the Classical Greek era it was one of the twelve cities of the Ionian League. The city flourished after it came under the control of the Roman Republic in 129 BC. According to estimates, Ephesus had a population of 33,600 to 56,000 people in the Roman period, making it the third largest city of Roman Asia Minor after Sardis and Alexandria Troas
First the Library of Celsus,  built in honour of the Roman Senator Tiberius Julius Celsus Polemaeanus in 135 AD.  It was to store 12,000 scrolls and to serve as a mausoleum for Celsus, who is buried in a crypt beneath the library.
Second the grand theatre,  which was able to hold 25,000 spectators.
Many thanks to Ana, who had a great trip visiting the 'Turkish delights', among them the amazing Ephesus.

As Turkey is in all the news today following yesterday's general elections...I wanted to remind of the riches that this country possesses, in hope they await safe future.