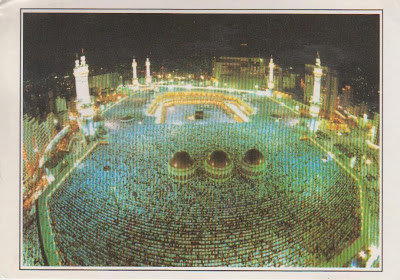 As the birthplace of Muhammad and a site of the Muhammad's first revelation of the Quran, Makkah or Mecca is regarded as the holiest city in the religion of Islam and a pilgrimage to it known as the Hajj is obligatory for all able Muslims.
This is a broad view of Masjid Al-Haram, the "Grand Mosque'', the largest mosque in the world surrounding one of Islam's holiest places, the Kaaba. The current structure covers an area of 356,800 square metres, including the outdoor and indoor praying spaces and can accommodate up to 4 million worshipers during the Hajj period, one of the largest annual gatherings of people in the world. Unlike many other mosques which are segregated, men and women worship at Masjid Al-Haram together.
Thank you J.S. ;))