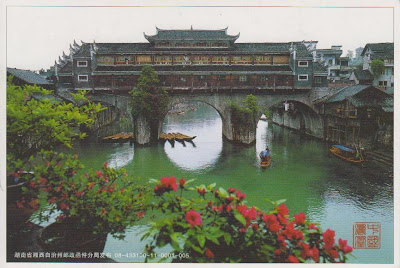 Another picturesque town from China - the ancient town of Fenghuang and its gorgeous rainbow bridge. Fenghuang City is located in the southwest of Hunan Province, at the foot of mountains and beside waters. Its construction has proved a very practical and scientific exploration in terms of the town site selection as well as layout design and city planning - it has made wonderful use of the mountain landscape and the water flows to create harmonious relationship between human residence and nature. It is now on Unesco WHS's tentative list.

The two stamps are from a set of four titled Chinese Idiom Stories issued in 2010.
(source: cultural china web-site)

'Sleeping on brushwood and tasting gall'
In the Spring and Autumn Period, the State of Wu defeated the State of Yue, and took the king of Yue, Gou Jian, and his wife prisoner. For several years, Gou Jian laboured as a slave in Wu. When he was released and returned to Yue, Gou Jian was determined to take revenge for losing his state. So that he would never forget his humiliation, he slept on a pile of brushwood and tasted gall before every meal. After ten years of careful preparations, he attacked and finally conquered the State of Wu.
This idiom is used to describe inspiring oneself and working hard to accomplish an ambition.

'Mao Sui recommending himself'
In the Warring States Period, the State of Qin besieged the capital of the State of Zhao. Duke Pingyuan of Zhao planned to ask the ruler of the State of Chu personally for assistance. He wanted to select a capable man to go with him. A man called Mao Sui volunteered. When the negotiations between the two states were stalled because the ruler of Chu hesitated to send troops, Mao Sui approached him, brandishing a sword. At that, the ruler of Chu agreed to help Zhao, against Qin.
This idiom means to recommend oneself.
Posted by agi at 23:25