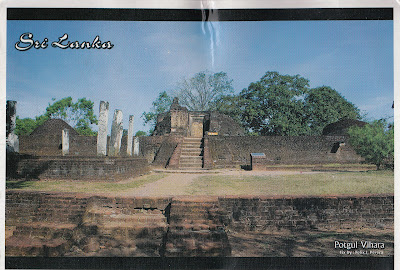 Polonnaruwa was the second capital of Sri Lanka after the destruction of Anuradhapura in 993. bears witness to several civilizations, notably that of the conquering Cholas, disciples of Brahminism, and that of the Sinhalese sovereigns during the 12th and 13th centuries. This immense capital created by the megalomaniac sovereign, Parakramabahu I, in the 12th century, is one of history's most astonishing urban creations, both because of its unusual dimensions and because of the very special relationship of its buildings with the natural setting.
The postcard shows Potgul Vihara or Library Monastery, which is believed to had been built, as mentioned in the chronicle, “for listening to the birth stories of the Great Sage, which were related by a teacher”. Today, if you enter the round room, which is plastered, the acoustics are still excellent.
Many thanks for this swap Naafiah :))