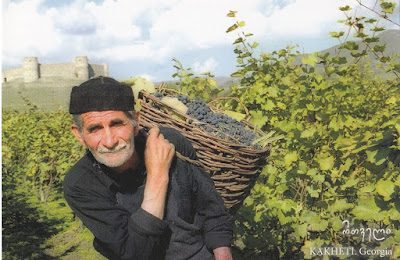 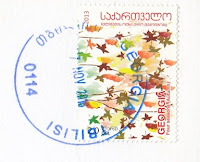 Local peasant carrying a godori (wicker basket):
in the background Chailuri or the Niakhura Fortress.

And here is one of the main incentives why to visit Georgia in October of all months :) It is the end of wine grapes harvest season - and Georgia is actually one of the oldest wine regions in the world. The fertile valleys and protective slopes of the Transcaucasia were home to grapevine cultivation and neolithic wine production for at least 8000 years. They have preserved their special traditional ways of making wine: UNESCO added the ancient traditional Georgian winemaking method using the Kvevri clay jars to the UNESCO Intangible Cultural Heritage Lists.

Even though my wish was to take a few days for the Kakheti region and stay overnight in one of the villages, the tour company that did such a package didn't have enough people signed up to make it happen, and I had too little time to organise it on my own. So I've entered the office of an agency in Tbilisi to see if I can do something in a day - and sure enough I found a good deal, just me and a friendly gal from the Philippines with a local driver/guide, and off we go to Sighnaghi :) We visited the lovely Bodbe Monastery, a local museum, and of course the Pheasant's Tears winery for some wine tasting, yay :) It was a good day!