Inside The Mysore Palace, India 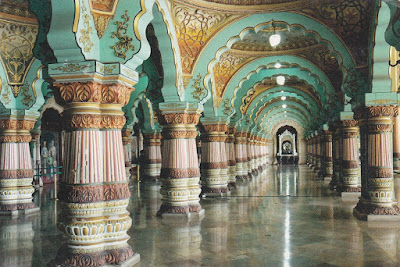 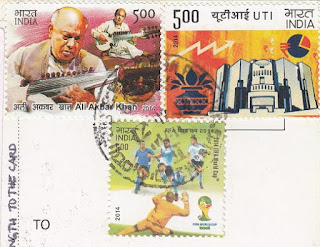 Checking my FB just minutes ago I came across a similar picture and thought - hey, I have a postcard from there! And jumped over here immediately to post it :) Many thanks to Prashanth for the swap.

Ambavilas Palace, otherwise known as the Mysore Palace, is a historical palace and a royal residence at Mysore in the southern Karnataka state of India. It is the official residence of the Wadiyar dynasty and the seat of the Kingdom of Mysore. The last palace, now known as the Old Palace or the Wooden Palace, was burnt into ashes during the 1896 Dasara festivities. Maharaja Krishnaraja Wodeyar IV commissioned the British architect Lord Henry Irwin to build a new palace. The initial part was completed in 1912, and it was expanded in 1940.
The architectural style of domes of the palace is commonly described as Indo-Saracenic, with blends of the Hindu, Mughal, Rajput, and Gothic styles. It is a three-story stone structure with marble domes, and has a 145-foot five-story tower. The palace is surrounded by a large garden.