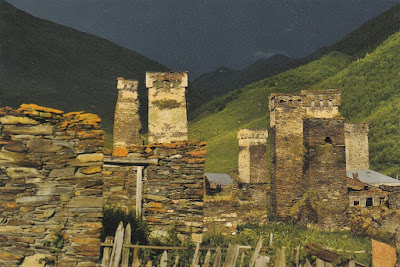 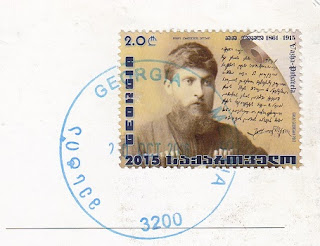 Ushguli is a community of four villages located at the head of the Enguri gorge in Svaneti, Georgia. Recognized as the Upper Svaneti UNESCO World Heritage Site, Ushguli is one of the highest continuously inhabited settlements in Europe. The region of Upper Svaneti is an outstanding example of an exceptional mountain landscape composed of highly preserved villages with unique defensive tower houses, examples of ecclesiastical architecture and arts of medieval origin.

I have already written about this WHS site but to see it with my own eyes is something else...It wasn't my first stop though, I had a flight going to Kutaisi in the country's west, and only after booking my flight have I realised that this town I never have heard of before harbours two WHS sites. Well, actually one - the other was for some reason removed from the list. So I have visited the Bagrati Cathedral and the Gelati Monastery, I just never got around to buying some postcards :/
Oh I've just read that 'UNESCO removed Bagrati Cathedral from its World Heritage sites in 2017, considering its major reconstruction detrimental to its integrity and authenticity.' Shame when this happens...

Upper Svaneti really is quite isolated, which is why the villages are so well preserved. I had to take a tour from Mestia in one of the marshrutkas (shared taxi van), and was lucky to get a smaller van with only three other co-passengers. The roads were quite rocky and in parts muddy, and even though the Georgian roads have European rules half the vehicles (like this van) have the wheel on the right (or should I say wrong) side, which ensured more adventure than needed! These interesting medieval towers were to be found even in Mestia, just in front of my guesthouse for example :) As its fairly touristy (plenty of treks to do from there, wish I had more time!) I managed to find one souvenir shop with postcards and stamps. As the woman working there pulled the stamps out of the drawer I've noticed they were all various, wavy and singles, which looked dodgy to the ever-suspicious self...in which case I use a glue stick to stop the possible mishandling. Still, I believe I've sent two cards, and here is only one..! Hmm I could go on and on about this trip...cos it was one of the best trips I have ever had :)) But I really shouldn't make these posts look too daunting to read ;P