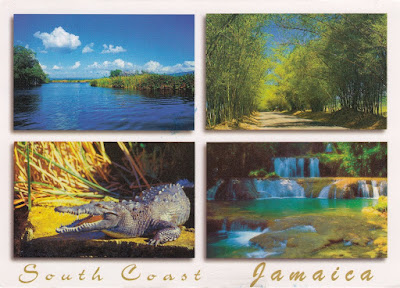 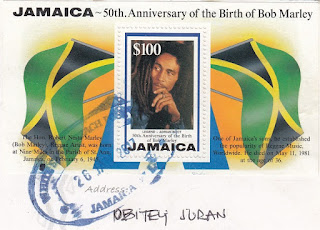 As I haven't had a view card from Jamaica before, I am so verrry happy about this card :) It shows: 1) the Black River - its name refers to the darkness of the river bed caused by thick layers of decomposing vegetation. Over 100 species of birds have been recorded in the Black River morass. 2) Bamboo Avenue - a two and a half mile stretch of road between Lacovia and Middle Quarter,  established in the 17th century by the owners of the Holland Estate to provide shade for travelers and to protect the road from erosion. 3) A Crocodile Safari, self-explanatory. And 4) the magnificent seven-tiered cascading Y S Waterfalls.

Not that I have seen any of these places...its a special kind of experience coming to Jamaica on a cruise ship. I don't see much sense in it. In fact I don't even count as being in Jamaica. At least thats what happens if you are on a tight budget. Just to get to Montego Bay (and back) from the cruise port you need to pay 14 dollars. Once there, what you face is a line of shops with touts outside and unfriendly staff inside. On the bright side, the tiny post office was open and the young lady working there most helpful :) I've seen a sign for the crafts market so I ventured there, and was 'attacked' by women there who all suddenly wanted to be my 'friends'. One of them braided like one tiny strand of my hair and didnt let me go until i bought something (hard to believe but I am way too polite sometimes!) and the stuff wasnt cheap at all. I ended up with two shot glasses as there was nothing else for my pocket (excluding bracelets and such). Then I went to the beach for a walk, the only beach you didnt have to pay for, and hey now I see its called a Dump-up Beach lol. (The urban dictionary's explanation of this term is most concerning btw). There was hardly anyone there, just a few local groups of people. And some glass to step on.

So that was my Jamaican adventure :) Now THIS is where you really wish to have a tour! You look at the photos and see sand and beach and think 'oh you are so lucky!' In some instances you are so right - this was not one of them.