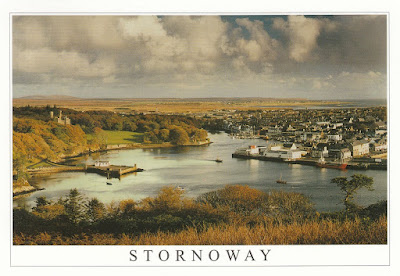 The full name of the island is actually Lewis and Harris; the northern part of the island is called Lewis, the southern is Harris, but both are frequently referred to as if they were separate islands. It is part of the Outer Hebrides, and is the largest and the most populous of the Scottish Isles. Stornoway is the main town, and the civil parish, including the town and various nearby villages, has a population of about 12 000.

The ship was docked in Stornoway, but first I had a nice little tour to go through, encompassing a few important sites. The Callanish Stones were erected in the late Neolithic era, and were a focus for ritual activity during the Bronze Age. They are standing stones placed in a cruciform pattern with a central stone circle. The Gearrannan Black House Village  consists of nine restored traditional thatched cottages, which were lived in till 1974 and were the last group of blackhouses to be inhabited in the Western Isles. The buildings were generally built with double wall dry-stone walls packed with earth, and were roofed with wooden rafters covered with a thatch of turf with cereal straw or reed. There was a tweed-weaving demonstration - Harris Tweed is a tweed cloth handwoven by islanders at their homes in the Outer Hebrides of Scotland, finished in the Outer Hebrides, and made from pure virgin wool dyed and spun in the Outer Hebrides. Well why not throw in a photo while at it :) (oh and later on I had the most delicious sandwich in Stornoway, in a small tucked-away deli. I regret not buying the caviar crisps! Never found any anywhere else.) 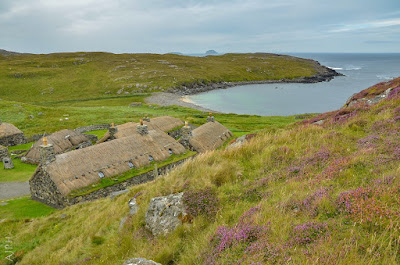