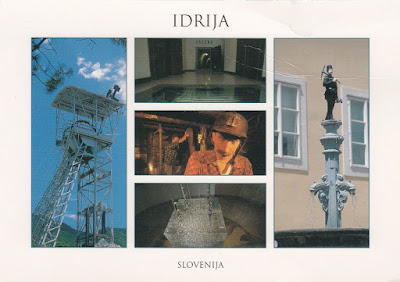 Mercury is a relatively rare metal, whose use has long been irreplaceable in a variety of technical, chemical and industrial processes. It has only been produced in substantial quantities and over a long period by a small number of mines worldwide, of which the two largest, until recent times, were at Almadén in Spain and Idrija in Slovenia. These two mining towns, whose origins date from ancient or Medieval times, demonstrate the lengthy period over which a socio-technical system of extraction specific to this metal was in operation, and the process of evolution it underwent.
Many thanks to Mirjam who contributed to my collection, also using lovely bird stamps :))