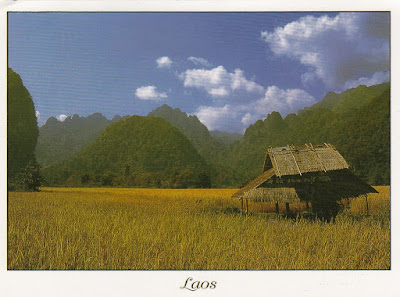 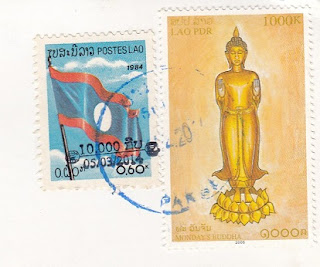 This is the first postcard I've sent from Laos...we have just left the paradise called Si Phan Don (4000 islands) and had to stop in Pakse town on our way to Vang Vieng. We were having coffee in a very laid back 'restaurant' in a private house, there were postcards but no stamps, so the (most probably) lady owner said just leave it with me i'll go to the post office for you. And she did! I wasn't sure about it until I received this card, paid a bit extra for the service but was worth it :))
Vang Vieng (Lao: ວັງວຽງ) is a tourist-oriented town in Laos in Vientiane Province about four hours bus ride north of the capital. The town lies on the Nam Song River. The most notable feature of the area is the karst hill landscape surrounding the town.
The place is very tourist-oriented and is teeming with backpackers (many of them keen to do inner tubing pissed as hell) really not my cup of tea, but the landscape is truly amazing and I was willing to go just to finally try riding in a balloon - pricewise and placewise it seemed like a now-or-never moment. I do have a fear of heights and I'll probably never do it again, but I do not regret it! Here a pic: 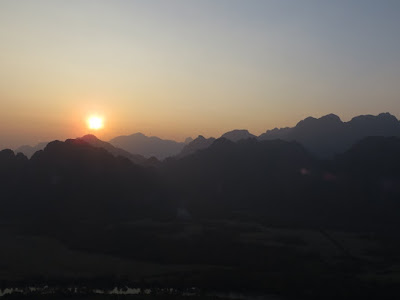