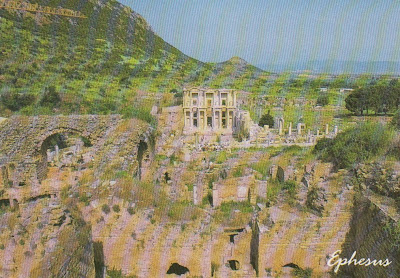 The ancient Greek and later Roman city of Ephesus was one of the twelve cities of the Ionian League during the Classic Greek era (5th-4th cent. BC) and later played an important role in the beginnings of Christianity - the Gospel of John may have been written here.
The centre of this view of the archaeological site is the Library of Celsus, built in the honor of the Roman Senator Tiberius Julius Celsus Polemaeanus, completed in the year 135 AD by his son. It was built to store 12 000 scrolls. In 262 the interior and all its books were destroyed by fire in a devastating earthquake...
Thank you Goran, I believe you enjoyed your tour of the archaeological sites in Turkey ;)
(UNESCO tentative list)
Posted by agi at 23:09