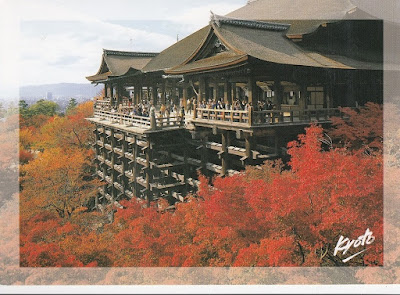 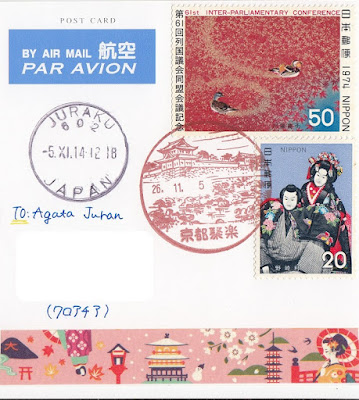 Kiyomizu-dera is an independent buddhist temple in eastern Kyoto, a part of the Historic Monuments of Ancient Kyoto UNESCO whs. The temple was founded in 788, and its present buildings were constructed in 1633 - there is not a single nail used in the entire structure. It was one of 21 finalists for the New Seven Wonders of the World in 2007.

I notice with perplexity that it has been over three years now that I have posted about Japan. Today I've chosen this card because of the Sunday Stamps theme: letter 'i'. Many Japanese stamps could be posted in relation as many are fabulous illustrations - but more specifically the top stamp was issued for the 61st Inter-Parliamentary Conference which was held in Tokyo in 1974 (I have to admit I'd never guess this stamp is that old). I don't really follow but the most prominent of the world's political issues, maybe I have heard of IPU (Inter-Parliamentary Union) before but I certainly didn't make a note of it. IPU was founded in 1889 and was the first permanent forum for political multilateral negotiations.
I love the fact that the stamp matches the view's autumn colours (thank you Yuko), as does one of the cancellations (I do wonder why there are two). The artwork is Passion (1934) by Kawabata Ryushi. More interesting (!) ideas for the letter 'i' hide behind the link for Sunday Stamps :)