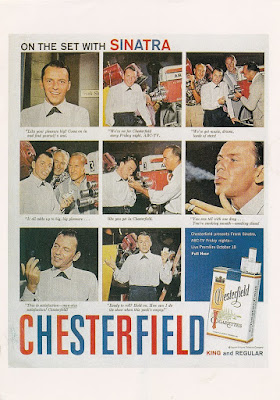 As I have succumbed and bought a packet of cigarettes again today (after a week of resilience) here is an apt blog post - a Chesterfield ad, from the times (50's) when smoking was cool. It is actually an ad for Frank Sinatra's show on ABC TV, with Chesterfield as a sponsor. What you probably can't see written in small letters beneath pictures is a unique way of phrasing things - my favourite is the caption for the penultimate picture, stating: This is satisfaction - man-size satisfaction! Chesterfield! :D Thanks goes to Michaela :)