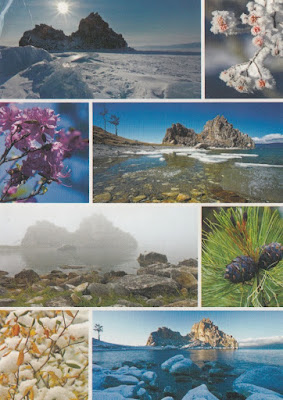 If I was given a choice to choose just one trip for the rest of my days, that would def be the continuous rail route from Europe to SE Asia, and with new routes being open or in planning, a return-trip could be quite epic! There is of course the classic Trans-Mongolian Route, which stops at many places in the Russian Federation incl. the WHS Lake Baikal.
The lake's largest island ( and the world's  fourth-largest lake-bound island ) is the Olkhon, and one of its most prominent spots is pictured here - the Shamanka, or Shaman's Rock. The indigenous Buryats, adherents of shamanism, believe the island to be a spiritual place; they believe that Burkhan, a modern religious cult figure of the Altai peoples, lives in the cave in this rock, one of nine most sacred places in Asia.

I was quite...no, VERY surprised that I haven't posted anything about Baikal yet..! I am sure I have more postcards to show, I must have been waiting for all of them to be in one place. But these views are so calming and reminiscent of 'real winter', I just had to pop them in here. Thank you Angela :)
Posted by agi at 16:05