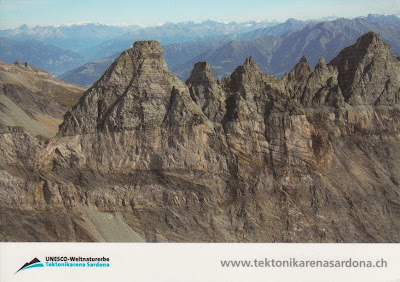 The Glarud Thrust is a major thrust fault in the Alps of Switzerland, which forms the contact between older Helvetic Permo-Triassic rock layers and younger Jurassic and Cretaceous limestones. Thrust faults of this kind are not that uncommon but this is a well-accessible example which has as such played a great role in the development of  geological knowledge on mountain building.
Many thanks to Sara who helped me a lot with Swiss Unesco sites, and used a beautiful Europa forest stamp on this one :)