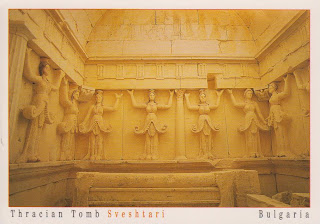 Thracians were a group of Indo-European tribes, first mentioned in the epic poem Iliad (8th cent. BC) as allies of the Trojans against the Greeks. They inhabited central and southeastern Europe, and were regarded as warlike and ferocious (or barbarian). With time they became hellenized and slavicized and their language extinct.
The Thracian Tomb of Sveshtari is one of the many equisit Thracian archaeological finds in Bulgaria - dating from the 3rd century BC, it is a reminder of the culture of the Getae, the tribe in contact with Hellenism and Hyperborean culture. The tomb's architecture is unique, showing ten caryatids (female figures) and painted murals.
I would so love to see this! There's something endlessly fascinating about ancient peoples and random findings of their culture. The matching stamp is perfect, and additional female figures on stamps to follow the theme. Everything is just lovely, thanks again Lilia :)))