White Storks (And A Local Story) 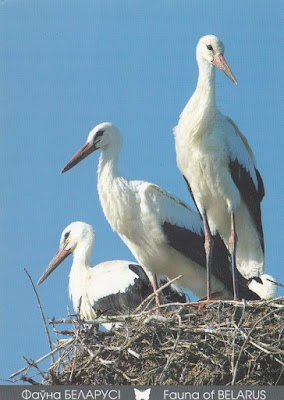 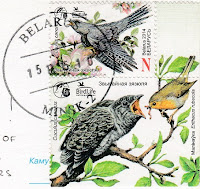 Another one in the series of Fauna of Belarus, showing White Storks. As they are migratory birds, they would have arrived from the Sub-Saharan Africa by now, nesting and having chicks. Thank you Liudmila for this card and lovely stamp :)

This has reminded me of a popular story in my country, about a pair of storks called Klepetan and Malena. Malena is a madame stork who (for 24 years now) hasn't been able to fly south because of a broken wing. Beginning of a sad story? One may think... But she has found true love in Klepetan, who comes back to her every year to the same spot! With a great help from a kind Sir Stjepan Vokić (who happens to live in the same village in the north of Croatia where my mum comes from :)) Malena is able to survive the winter and take care of the young ones. Each year (for 14 years now) the whole country is waiting for Klepetan to return to his Malena - it is usually on the same date, but this year he was 6 days late. Everyone was worried..! But in the end he made it, tired but happy :)