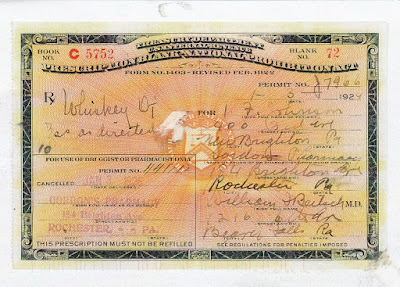 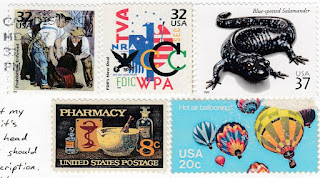 Now this is something interesting, and completely new to me! Thanks to Eric, who also used great stamps incl. prohibition and pharmacy theme, and not a reptile but equally welcome salamander :)

As found on the 'Spirited Republic' web-site:

Alcohol is often thought as the cause, rather than the cure, to many ailments. However this wasn’t the case during  Prohibition; the Volstead Act allowed for an exception for the medicinal use of alcoholic beverages by patients who obtained a prescription from a licensed physician, or for religious reasons.
Whiskey became the new wonder-drug, reported to be useful in the treatment tuberculosis, anemia, pneumonia, and high blood pressure, among other disorders. Adults were allotted one ounce every few hours after parting with $3—equal to about $40 today—to a local practitioner. The new law required prescription pads which were issued by the U.S. Treasury Department, the records of which are held by the National Archives.
This example was referred to a certain I.F. Johnson in 1924.
To this day I am certain that whiskey cures, if anything it eases the mind..!