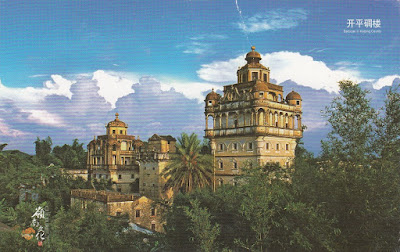 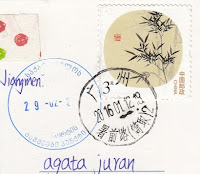 Again I've shortened the full title of the whs by omitting 'and the Villages', at least until I somehow manage to get by a postcard that shows the actual villages...This card travelled a long time, three months in total - and when you look closer at the cancellation on the left. you can see why: it was missent to Georgia, so it took a month and a half to get there, and equal amount of time to get from there to here. All's well that ends well! Thank you Kira for this lovely view :)

The Kaiping Diaolou are fortified multi-storey towers, generally made of reinforced concrete. They display a complex and flamboyant fusion of Chinese and Western structural and decorative forms.
The building of defensive towers was a local tradition in the Kaiping area since Ming times in response to local banditry. The nominated Diaolou represent the final flourishing of this tradition, in which the conspicuous wealth of the retuning Chinese contributed to the spread of banditry and their towers were an extreme response.