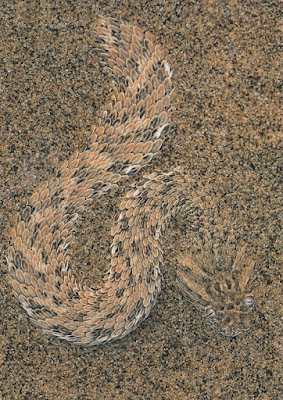 Another great official snake card! And species I wasn't familiar with so far - sidewinding adder or Bitis peringueyi, a venomous viper species found in Namibia and southern Angola, a small snake with an average total length of 20–25 cm. An ambush hunter, it buries itself just beneath the surface of the sand with only its eyes and the tip of its tail exposed; when prey happens by, it is seized and envenomated.
Dank je Annemiek :))
Posted by agi at 10:58