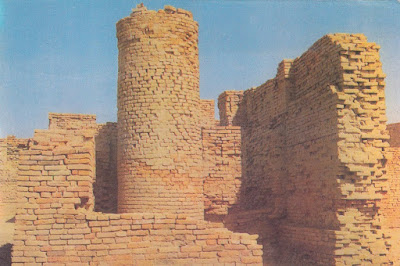 The Archaeological Ruins at Moenjodaro are the best preserved urban settlement in South Asia dating back to the beginning of the 3rd millennium BC, and exercised a considerable influence on the subsequent development of urbanization. The archaeological ruins are located on the right bank of the Indus River, 510 km north-east from Karachi - representing the metropolis of Indus civilization, which flourished between 2,500-1,500 BC in the Indus valley and is one of the world’s three great ancient civilizations.
The discovery of Moenjodaro in 1922 revealed evidence of the customs, art, religion and administrative abilities of its inhabitants. The well planned city mostly built with baked bricks and having public baths; a college of priests; an elaborate drainage system; wells, soak pits for disposal of sewage, and a large granary.

On the photo, as written on the back of the postcard, is a well - private wells were rebuilt over many generations to serve the needs of a large household or neighborhood. This well in DK G area at Mohenjo-daro stands like a chimney because all of the surrounding earth has been removed by excavation. Many thanks to Bilal :)