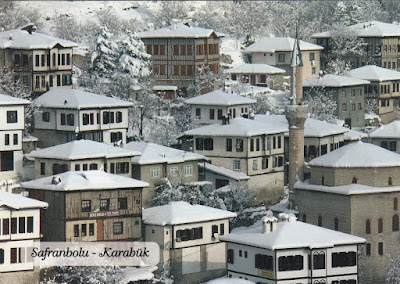 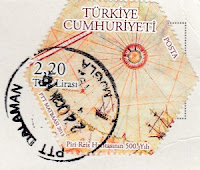 From the 13th century to the advent of the railway in the early 20th century, Safranbolu was an important caravan station on the main East–West trade route. During its apogee in the 17th century, Safranbolu's architecture influenced urban development throughout much of the Ottoman Empire. It has preserved its original appearance and buildings to a remarkable extent.
As you may guess, the name of the town derives from saffron, since this was a trading place and a center for growing this most valuable spice. Today saffron is still grown at the village of Davutobası which is 22 km east of Safranbolu and probably one of the best quality saffrons in the world.
No name on the card to say my thanks...for this beautiful view of the snow-covered traditional houses.
.
Posted by agi at 17:25