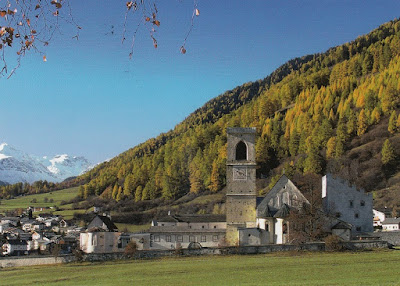 The Benedictine Convent of St John at Müstair, located in a valley of the Grisons in the south-eastern part of Switzerland, south of the Alps, was founded around 775, probably on the orders of Charlemagne. At the beginning of the 9th century it was noted as being an establishment of religious Benedictines, and became a women’s abbey in the first half of the 12th century. Religious activities have continued uninterrupted until the present day, with the abbey becoming a priory in 1810.
The conventual church houses the most important cycle of frescoes of the Carolingian era conserved in situ. The creation of these frescoes is dated  around the first half of the 9th century.
Many thanks to Rosmarie, the stamps are really fun :)