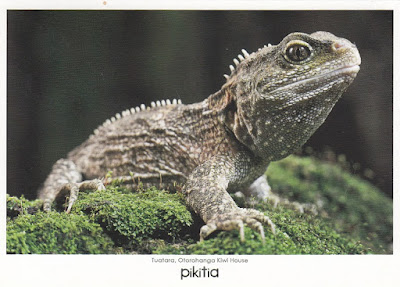 Have posted about one of these cool guys already, but whats the harm in reminding oneself of just how interesting they are? :) Because, as much as tuatara looks like a lizard, it is not - its close, but still. Tuatara are reptiles endemic to New Zealand, and are part of a distinct lineage, the order Rhynchocephalia (which, in fact, includes only two living species of tuatara). Their name derives from the Māori language and means "peaks on the back". Like many of New Zealand's native animals, they are threatened by habitat loss and introduced predators, such as the Polynesian rat. They were extinct on the mainland, with the remaining populations confined to 32 offshore islands; until the first mainland release into the heavily fenced and monitored Karori Sanctuary in 2005.
A success story for the survival of this unique species, relatively so but some help is better than none..! Many thanks to Amy, also for the Year of the Monkey stamp :)
Posted by agi at 13:21