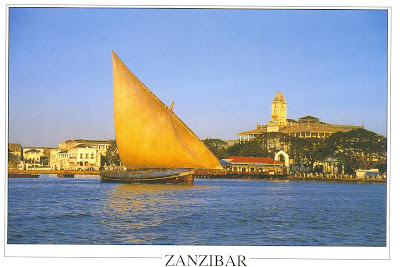 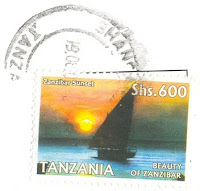 Zanzibar was once a separate state; in 1964 it united with Tanganyika to form Tanzania. and is now its semi-autonomous part. Its main industry is spices trade.
I love this unification of both postcard and stamp having the same motive of a dhow, traditional arab sailing vessel :) Sent on the19th of August, 2008. 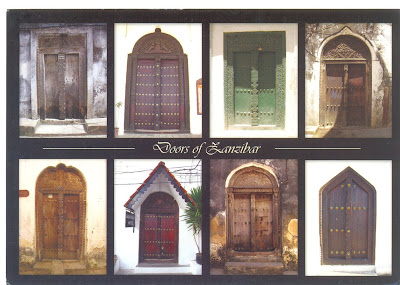 The Stone Town of Zanzibar is a fine example of the Swahili coastal trading towns of East Africa. It is located on the western coast of Unguja, the main island of the Zanzibar Archipelago. It is a former capital of the Zanzibar Sultanate, and was a flourishing centre of the spice trade as well as the slave trade in the 19th century.
The most well-known feature of Zanzibari houses are the finely decorated wooden doors, with rich carvings and bas-reliefs, sometimes with big brass studs of Indian tradition. Those of Indian style have rounded tops, while those in the Omani Arab style are rectangular. Gorgeous :) 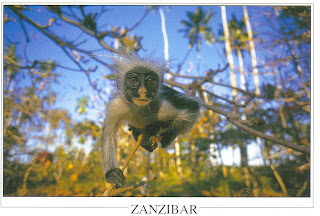 Monkeys are not my fav animals but this one is really cute! As this postcard arrived with the other two, I am sneaking it in under an Unesco post ... xD