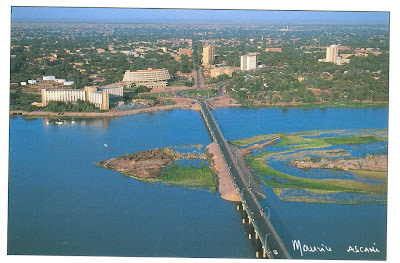 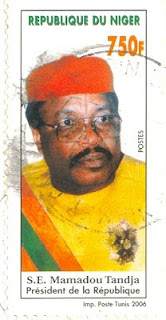 Through Togo and Benin (and its splendid beaches) to Niger...

To my friend's regret he didn't have time to explore many natural wonders of Niger, among them Air and Tenere nature reserve, 2nd largest in Africa. But he found the capital Niamey as friendly and pleasant as most cities and places he visited during his stay in western Africa. The city was founded on the east ("left bank") of the Niger River, here you can see the Kennedy bridge whose construction enabled Niamey to expand onto the right bank of the river to the west.
On the stamp is (former) president of Niger Mamadou Tandja, who was overthrown in a military coup d'etat in February 2010.
(How did I manage to scan this so crookedly..?!)
Posted by agi at 19:55