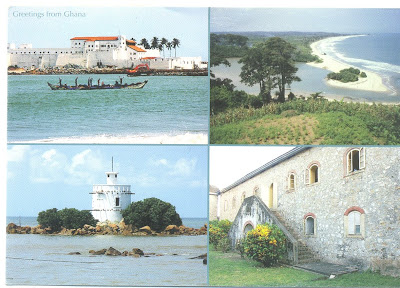 Known as The Gold Coast until 1957, when it achieved independance from the United Kingdom and was named after the ancient Ghana Empire (8-13th century) - Ghana meaning the Warrior King. The first Europeans to arrive at the coast were the Portuguese, who built the Elmina Castle in 1482 (top left). Prince's Town (down right) is a fort built by the Brandenburgers in 1683. I was told this photo doesn't do it justice..! Additionaly I've found out this card is Unesco, yay :)) 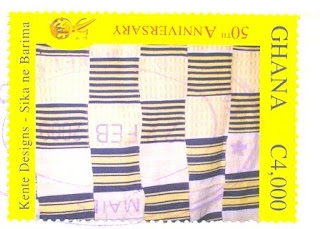 This postcard was sent on the 22nd of February, 2008. This stamp shows the famous Kente designs, which is an Ashanti hand-woven ceremonial cloth. It is normally much more colourful!