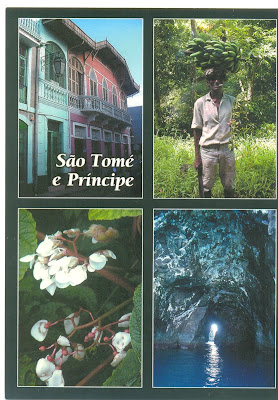 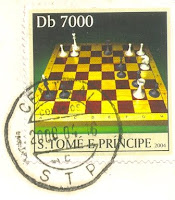 I will shamefully admit that I didn't have a proper notion of São Tomé and Príncipe's geographical position until I got this postcard..! I had no idea it was on the itinerary, in fact it really wasn't but more of a spur-of-the-moment journey :) I am so glad it was made as my friend has told me so many nice things about it - I dare say it was one of the highlights..?
The islands São Tomé and Príncipe are situated some 250 km off the northwestern coast of Gabon, and are also 140 km apart from each other. Both islands are part of an extinct volcanic mountain range.The state gained independance from Portugal in 1975. Its the Africa's second smallest country!
When you receive a postcard from such a rare country (I wonder if I'll ever get another one..!) its great to get a multiview which represents its highlights - very happy!
Posted by agi at 21:07