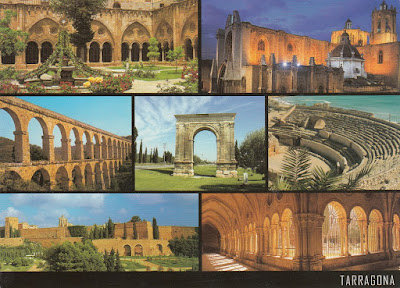 First I thought Tarragona is WHS, then I couldn't find it on the list, and now I realise parts of it are under a different (ancient) name. Tárraco (modern-day Tarragona) was a major administrative and mercantile city in Roman Spain and the centre of the Imperial cult for all the Iberian provinces. It was endowed with many fine buildings, and parts of these have been revealed in a series of exceptional excavations. Although most of the remains are fragmentary, many preserved beneath more recent buildings, they present a vivid picture of the grandeur of this Roman provincial capital.

This postcard shows some of the mentioned  remains, but also the 12th-century Metropolitan Cathedral-Basilica of Saint Mary and the magnificent adjacent cloister. As Tarragona is a Catalonian port on Costa Daurada it is near Barcelona, and that's where the ship actually anchored. I was happy to go the first time; when I got exactly the same tour the 2nd time I was confused (to say the least) and wished to have more relaxing time for Barcelona. Too fussy eh? :P 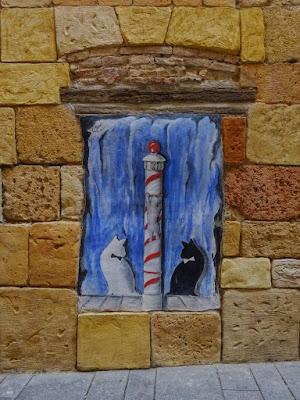