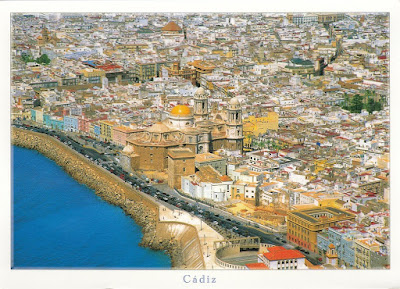 Cádiz is an ancient port city in the Andalusia region of southwestern Spain. It was founded by the Phoenicians and is regarded by many as the oldest continuously inhabited city in Western Europe. It has been a principal home port of the Spanish navy since the accession of the Spanish Bourbons in the 18th century.


My first visit to Cadiz was on Easter Monday and the overall number of visits is 8, which made it a fairly familiar port (the only more frequented port was Gibraltar with 9 visits). Gradually I've discovered its charming streets and architecture as well as well-priced shops.
This was the first European cruise and the first cruise without my first manager and assistant manager...it all kind of went downhill from there. I never again felt the same support or creativity, in retrospective I wish I have left the ship on the same date...yeah its true despite some of the nice ports I still managed to visit. In a way I am still paying for my decision to stay on, literally so. The most unprofitable job I could have found at a turn-around point of life. This is why I shudder a little bit every time someone says how cool it was, how lucky I was, etc. In the end how much of a reward is it to spend a few hours in different ports, when you don't have a supportive team, when you witness first hand the unfairness of management, when you have to watch your pennies and have no real friends around you, that is the real question..!