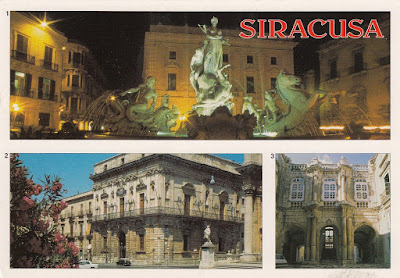 The full name of this UNESCO site would be Syracuse and the Rocky Necropolis of Pantalica which therefore consists of two separate elements, but I have only a postcard showing one of them.
Ancient Syracuse includes the nucleus of the city’s foundation as Ortygia by Greeks from Corinth in the 8th century BC. The site of the city, which Cicero described as ‘the greatest Greek city and the most beautiful of all’. Many remains bear witness to the troubled history of Sicily, from the Byzantines to the Bourbons, interspersed with the Arabo-Muslims, the Normans, Frederick II of the Hohenstaufen dynasty (1197–1250), the Aragons and the Kingdom of the Two Sicilies. Historic Syracuse offers a unique testimony to the development of Mediterranean civilization over three millennia.

Even though this postcard was swapped for, I have been lucky enough to visit Syracuse while we were in port in Catania (this was a turbulent cruise due to bad weather conditions, the route pretty much changed as we went - we had to skip Venice, Kotor and Ravenna (three UNESCO spots right there!) and got an overnight in Catania instead) as I had enough free time to catch a train and have a walk around town - though I could have easily spent many more hours roaming the streets of this lovely place. In the end I was still in a sort of a rush...here is the cathedral square, so spacious and neat :) 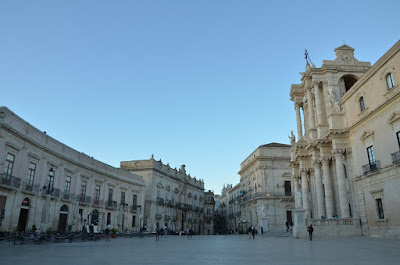