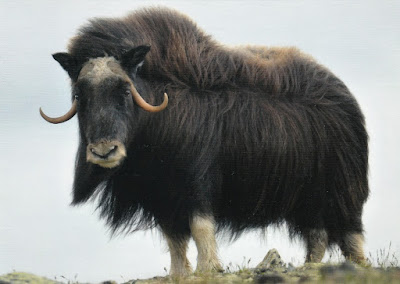 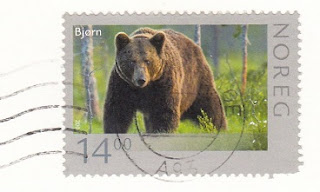 The muskox (Ovibos moschatus), (in Inuktitut: ᐅᒥᖕᒪᒃ, umingmak), is an Arctic mammal of the family Bovidae, noted for its thick coat and for the strong musky odor emitted during the seasonal rut by males, from which its name derives. Its Inuktitut name "umingmak" translates to "the bearded one". Muskoxen primarily live in Greenland and the Canadian Arctic of the Northwest Territories and Nunavut, with small introduced populations in the American state of Alaska, the Canadian territory of Yukon, the Scandinavian Peninsula and Siberia.

The species was introduced from Banks Island in Canada to the Dovre mountain range of Norway in 1932 before they were hunted to extinction during the Second World War. The animal was reintroduced to Norway in 1947; this population expanded into Härjedalen, Sweden in 1971. An introduction attempt in Svalbard was carried out in 1925-26 and 1929; however, this population died out in the 1970s. They were also introduced in Iceland around 1930 but did not survive.

This somehow makes me sad even though the musk oxen are on the way of population recovery despite the historical overhunting...mostly because of the enforced new hunting regulations. In Norway there are about 300 in the protected Dovrefjell National Park.
I have chosen this postcard just now because this evening we watched a wonderful German documentary Abenteuer Nordsee (North Sea Adventure) which 'visited' all the coastal areas of the North Sea and the underwater in between them. There we saw two musk oxen slamming heads to get a girl. Their fur seems so velvety, I wonder if it is!
Thank you Nore :)