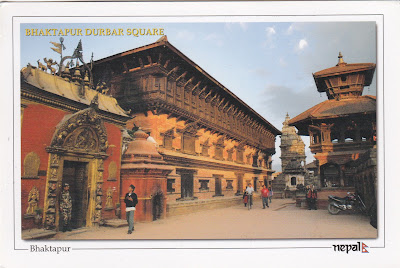 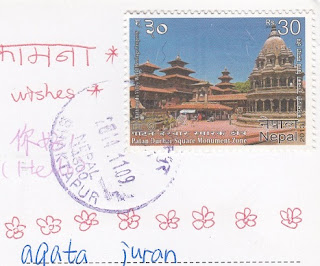 Bhaktapur is an ancient Newar city in the east corner of the Kathmandu Valley, Nepal, about 8 miles (13 km) from the capital city, Kathmandu. It is one of the three cities with Durbar (Palace) square comprising the UNESCO site (other two being Kathmandu and Patan).
Bhaktapur was the largest of the three Newar kingdoms of the Kathmandu Valley and was the capital of Nepal during the great 'Malla Kingdom' until the second half of the 15th century. It has the best-preserved palace courtyards and old city center in Nepal and is listed as a World Heritage Site by UNESCO for its rich culture, temples, and wood, metal and stone artworks. This is supported by the restoration and preservation efforts of German-funded Bhaktapur Development Project (BDP).

As I have already written about the Kathmandu Valley here I haven't titled the post as UNESCO, but it is still such a great addition to my collection! The card was signed by Daisy, who also used a stamp depicting the third important Durbar square in Patan. So brilliant, thank you :)
Posted by agi at 11:35