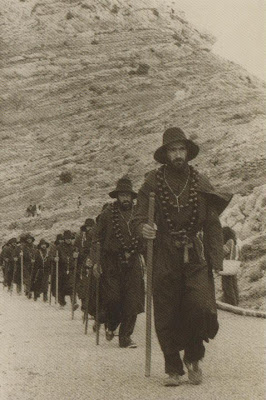 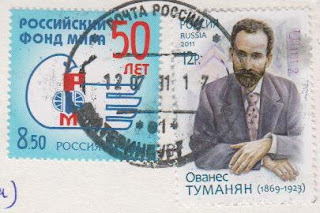 
Wow today i really need to put some effort in finding the supporting info for my blog! It didnt help that 'les pelerins' was spelt 'els pelegrins' on the card heh. But eventually i found out more about the interesting ritual on this photo.
In the spanish province of  Castellón (between Barcelona and Valencia) a pilgrimage takes place every year on the last friday of April. The 700 -year-old tradition sees the pilgrims of the village Les Useres setting out on their two-day walk to the sacred mountain of Penyagolosa to pray for rain and forgiveness. There are 13 hand-picked men dressed in special blue robes, accompanied by the village priests, but also the locals who carry supplies for the journey.
Private swap with Masha/forelka - thanks! :)