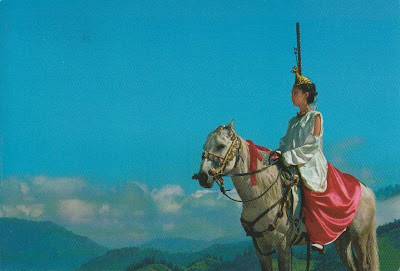 An Altaian woman on horseback. Reconstruction of the Pazyryk traditional clothes. Altai, Russia.


Another great swap with Elena/4ajka - this card was actually 'lost' and Elena was so kind to resend it. Thank you so much for your thoughtfulness, and another awesome set of stamps! :)))
Altai is a federal republic in Russian Federation, the capital being Gorno-Altaysk. It is situated in the very center of the asian continent, at the junction of Siberian taiga, steppes of Kazakhstan and semi-deserts of Mongolia. The ethnic Altay people make for 30% of the population ( Russians are prevailing with 57% ) - they are an ethnic group of Turkic people, with their own language and tradition.
The Pazyryk culture is an Iron Age archaeological culture (6. to 3. century BC) - artifacts and mummified humans were excavatedin the Siberian permafrost in the Altay mountains, and the most renowned is the 'Ice Princess', found on the Ukok Plateau. This on the card is the reconstruction of the Ukok Princess traditional clothes! Wow what a lesson in history - and a great field to imagine stories of the days past :)
Posted by agi at 17:59