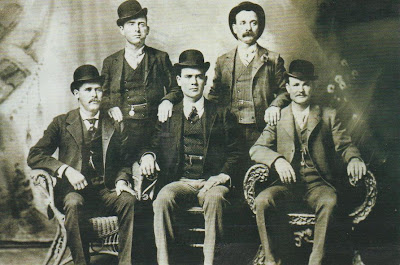 
I have tagged this card in one of the offer tags - I love the stories of the Wild West and finding an 'original' picture of Butch Cassidy and the Sundance Kid was an exciting moment for me!
As most people, what i know about this duo is what i've seen in the famous movie with Paul Newman and Robert Redford - and the uncertainty of how their story really ended. The speculations i.e. the most plausible narrative is very interesting, alas too long to write here...
But here are some of the details: Butch's real name was Robert LeRoy Parker. He became a criminal in his teen years; he formed the notorious Wild Bunch Gang when he was 30 y.o., and his partner-in-crime Harry Longabaugh aka The Sundance Kid joined him soon after. They are believed to have gone hiding to South America in 1901, which lead them to the Bolivian town of San Vincente. They met their deaths in a shoot-off with the Tupiza police.
One of the things i regret missing on my trip to SA is visiting the alleged place of their demise. I remember advertised tours, which would have been simple enough but we avoided tours cos they are expensive and impersonal - and there was no time to do a detour on our own...boo.
Anyways, this is a great card, and big thanks to Denise/HickreeNut! :)
Posted by agi at 11:50