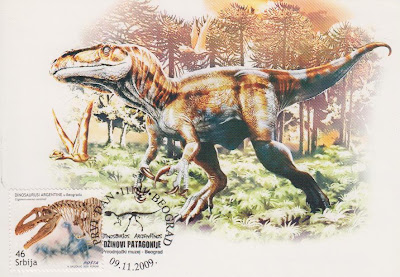 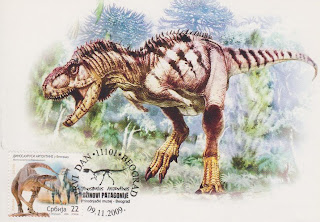 This weekend i was blown away with this brilliant surprise from dear Ana - my thanks run to the heavens and back! heh :)))

Two years ago there was an exhibition in Beograd's Natural History Museum called 'Dinosaurs of Argentina - Giants of Patagonia',  that presented 40 complete skeletons of 15 different dinosaur species, some eggs, nests with youngs, and footprints. These maxi-cards show Gigantosaurus Carolinii and Herrerasaurus Ischigualastensis.
Gigantosaurus Carolinii lived around 97 million years ago during the early Cenomanian stage of the late Cretaceous Period (i wish i knew more about the earth's history...then this would make more sense :S). It is one of the largest known terrestrial carnivores - even slightly larger than the famous Tyrranosaurus! The first remains were found in 1993 in deposits of Patagonia, in southern Argentina. It could grow up to the length of 13m  and weighed probably between 7-13 tons. massive.
First remains of Herrerasaurus Ischigualastensis were found in NW Argentina in 1959 by an andean goatherd Herrera - hence the name! They belong to the late Ladinian Age/Middle Triassic (some 230 million years ago). This carnivore was smaller (3 to 6 meters) but surely just as scary..!
Well one learns something new every day :-D
Posted by agi at 21:08