I think we can all agree how tragic the story of The Romanovs is...I've known the outlines of the story for a while, but only now that i've started receiving these striking portraits have i decided to read more about it.﻿ 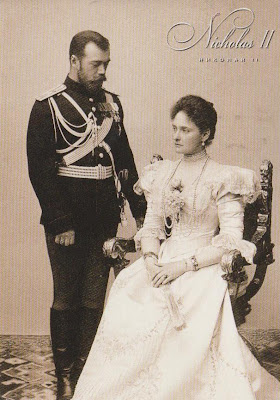 This card showing Emperor Nicholas II and Empress Alexandra Feodorovna was received via CaCrr - big thanks to Angela :) The photo was taken in 1898.

Nicholas was a successor to Alexander III - became The Emperor And Autocrat Of All The Russias in 1894, and abdicated following the February revolution of 1917. He also got engaged to Alix of Hesse in 1894, who had to convert to Russian Orthodoxy for the marriage. Alix /Alexandra was a granddaughter of Queen Victoria of the United Kingdom.
They are both known as the last Tsar and Tsarina of Russia. 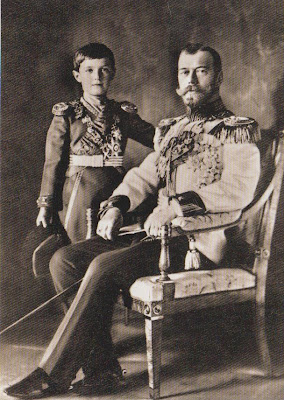 Official Card: RU-381405
This card showing Emperoror Nicholas II and his only son Alexei was sent to me by Julia/Faina.

In 1991 bodies of the executed royal family were supposedly found in Yekaterinburg, but only of the parents and three children. An American scientist concluded from dental and vertebral remnants that the bodies of Anastasia and Alexei were missing (two of the youngest). This mystery may never be solved..!