Fridays are not busy around here...not yet that is. Its a great opportunity to update my blog - not only with recently received cards, but also with some jewels from the archives :) I am a big fan of cards showing national costumes; alas i am not able to participate in tags and round robins with that theme, coz here in Croatia such cards are almost non-existant :( in my region Dalmatia most cards are related to the sea - which makes perfect sense of course, but please i beg you add some diversity!!! Croatia has such rich and interesting folklore, i am sure people would love to see it and show it to others!
And i will show you what i've got :) 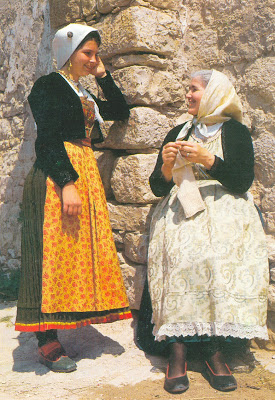 This card shows the national costumes of a small seaside town Pakoštane. It is actually not far from where i live, but there is quite a difference from our local national costumes :) I've picked up this card...14 years ago, wow. i was still a student, and was in a stage of  'maniacal surge' as i was buying every postcard in sight (which seriously affected my monthly allowance...bellies were empty, ehm). I was sort of stashing them, which helped a bit later on when i started with the much better plan of actually exchanging them. This one i had to keep, it is sort of a rarity! (though i've never been to Pakoštane since, so i cannot really confirm this statement heh) 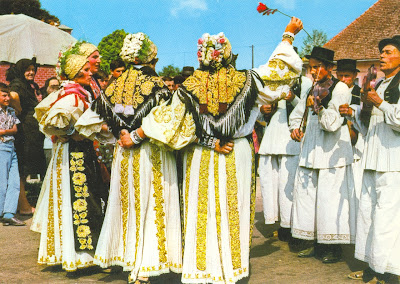 Another card very dear to me, and for an extra reason: it is from my mum's old collection. I was so excited when i found out that mum was also collecting postcards as a teenager :) She gave it up after she got married...but decided to keep what was there, and was happy to pass the collection on to me, (her sweet brilliant daughter :P)
The card shows a traditional festival called 'Đakovački Vezovi' (Embroideries of Djakovo). Djakovo is a small town in Slavonia region, 37km southwest of Osijek, with population of ca. 21 000 inhabitans. The festival was founded in 1967 and has become one of the regionally most popular festivals of its kind. It lasts for 2 weeks and usually ends on the 1st week of July, when the procession of the folklore groups from all over Croatia takes place. Would love to witness that one day..!