While in Jerusalem I've decided to do a day-trip to Bethlehem. We took a mini bus which drove us up to the Israeli West Bank barrier - a huge concrete wall separating Israel from the Palestinian Territory. We were perplexed and didn't quite know where we're going, but after some minutes we caught a sight of a town which turned out to be Bethlehem. Not such a little town as one might imagine! After all it is being visited by millions of tourists every year.
In any case, I was thrilled to find an open post-office in the centre of Bethlehem. To my even greater surprise they had quite an impressive choice of stamps! I was beside myself, I think I must have spent a weekly pocket-money heh. My friend must have 'swollowed a dumpling' watching me do that :D I did stop myself eventually, somewhat lamenting on the stamps left behind, but overly excited about the postcards I was going to send from Palestine!
It took them longer than 2 months to arrive...after being convinced they were lost in transit the joy was...well you should have seen me..! :) 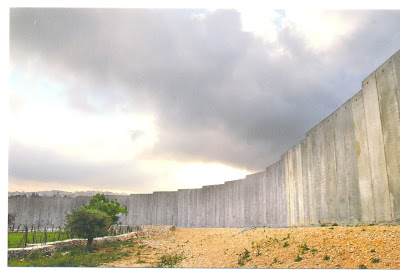 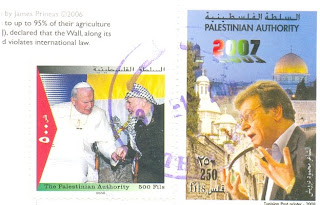 The West Bank Barrier - to my utter shame I wasn't aware of its existance before. Parts of the wall were covered with awesome artistic graffiti, all with the unified message of peace and tolerance. 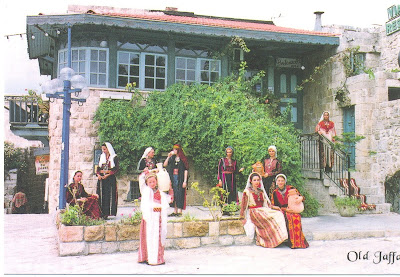 This postcard shows Palestinian women in their traditional coastal costumes near the entrance of an old house in Old Jaffa. All of these postcards were sent on the 30th of November, 2008.