It is not enough to say I LOVE Jordan! I wish I could have stuck around for another week at least, but alas there was no time...If an opportunity ever arises I will gladly fly back!
First we crossed the border from Egypt by ferry, and went straight for Wadi Musa where we would spend the night in a nice little hotel. I was amazed to see how swollen my feet were from a day's waiting at the ferry dock..! But nothing would stop me from discovering the poetical Rose-Red City of Petra. Yes, I have read about it, I have seen some photos...but I still lost my breath! And not just once!!! With a strong certainty I can exclaim - it is the most beautiful thing I have ever seen. 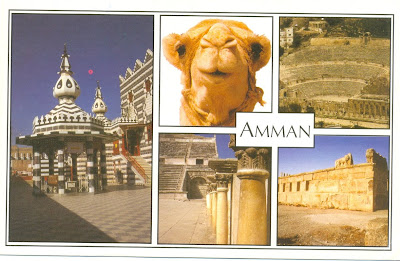 Amman was such a pleasure to visit, there was a certain feel of easiness and comfort. We stayed there for a few days, enchanted by the islamic calls for prayer (Adhan) or rather by the mellow and smooth voice of the local muezzin. From Amman we went for day trips to Jerash, Ajlun Castle and Mount Nebo.
The main post office had a philately section, I was lucky enough to find a small but cool variety of stamps :) 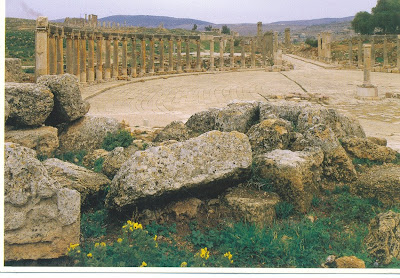 Jerash is now a modern town with more than 30,000 inhabitans; in the olden days of antiquity it was known as Gerasa, whose Greco-Roman ruins stay preserved to this day to witness its splendour. Jerash is considered to be one of the most important and best preserved Roman cities in the Near East. Walking among the ruins was magical! No wonder its on the Unesco WHS's tentative list :)
This postcard was sent on the 24th of November, 2008.