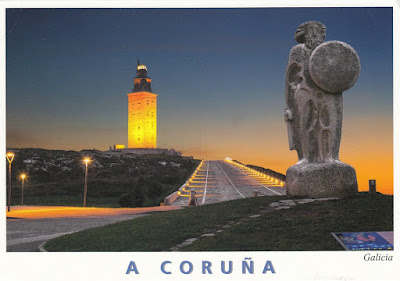 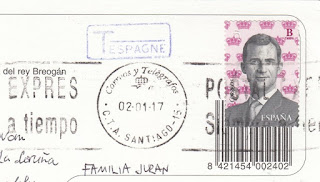 The Tower of Hercules has served as a lighthouse and landmark at the entrance of La Coruña harbour in north-western Spain since the late 1st century A.D. when the Romans built the Farum Brigantium. The Tower, built on a 57 metre high rock, rises a further 55 metres, of which 34 metres correspond to the Roman masonry and 21 meters to the restoration directed by architect Eustaquio Giannini in the 18th century.

The ship was in Lisbon on the 30th, it was nice to re-visit, and since I sent quite a few postcards whilst there almost three years prior to, I didn't search for any new ones but rather spent my free time roaming around trying to remember stuff. The New Year's Eve was again spent on board, working until 23:59h and then rushing down to the crew bar for the countdown. As I haven't really clicked with any peeps yet I just went to bed to rest. Actually throughout my two contracts I haven't found my kind of peeps...I guess thats how it goes for an introvert in an extremely extrovert surroundings. It felt like even those who may have come on board with some true values have adapted to the specific ways of life. Anyways!

On the 1st of January 2017 the ship docked in A Coruña, a busy port located on the Atlantic coast, on a promontory in the Golfo Ártabro. Learning it is home to a WHS site I immediately worked out how to get there and took a longish walk in drizzly weather. My eyes were abnormally watery, I remember that distinctly as in town I met some guests from the ship and they asked me whats wrong! Maybe it was an omen of what was to come?
(Ok that was a bit overdramatic lol)

And that is the end of the 2nd/Xmas cruise! If I've continued sending as many postcards per cruise or fortnight I'd have had a full box of them. Still, I do have a few pretties left to show, so stay tuned :) Esp becauseee...the big 50-night cruise across the Atlantic is next..!