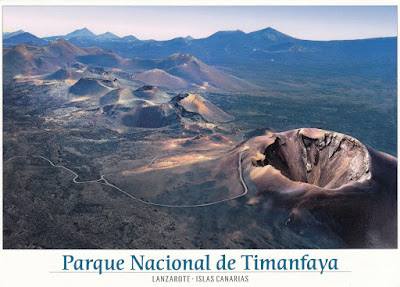 Timanfaya National Park (Parque Nacional de Timanfaya) is entirely made up of volcanic soil - the greatest recorded eruptions occurred between 1730 and 1736. The volcanic activity continues as the surface temperature in the core ranges from 100 to 600 °C at the depth of 13 metres, which is demonstrated by pouring water into the ground, resulting in a geyser of steam.

This landscape looks otherworldly, alas couldn't be visited as at this point of the job we were pretty much restricted to the port areas. Xmas was behind us (spent at sea), the day after the port of Fuerteventura was unreachable because of the strong winds so we spent an extra day at sea. Lanzarote was sunny and I had a fish sandwich for lunch, in a place teeming with locals so I thought it must be good! And it was. My colleague ate half of it with words 'I'll treat you when we get first pay' which of course she didn't lol, I've learnt the hard way she was a taker and none a giver, and that lasted for months. Now thats a special story! Perhaps not to be dwelt upon on a postcard blog heh.