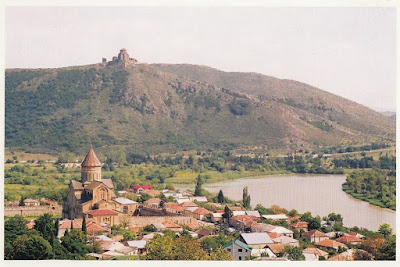 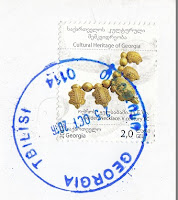 The historic churches of Mtskheta, former capital of Georgia, are outstanding examples of medieval religious architecture in the Caucasus. They show the high artistic and cultural level attained by this ancient kingdom.
In the front is the Svetitstkhoveli Cathedral, an Eastern Orthodox cathedral, a masterpiece of the Early Middle Ages. The site itself dates back to the early fourth century, and is known as the burial site of Christ's mantle. In the back, the Jvari Monastery is a sixth century Georgian Orthodox monastery situated  on the rocky mountaintop at the confluence of the Mtkvari and Aragvi rivers; according to traditional accounts, on this location in the early 4th century Saint Nino, a female evangelist credited with converting King Mirian III of Iberia to Christianity, erected a large wooden cross on the site of a pagan temple. The cross was reportedly able to work miracles and therefore drew pilgrims from all over the Caucasus.